He was born the award for Best Soundtrack Contest

WORK > He was born the award for Best Soundtrack Contest 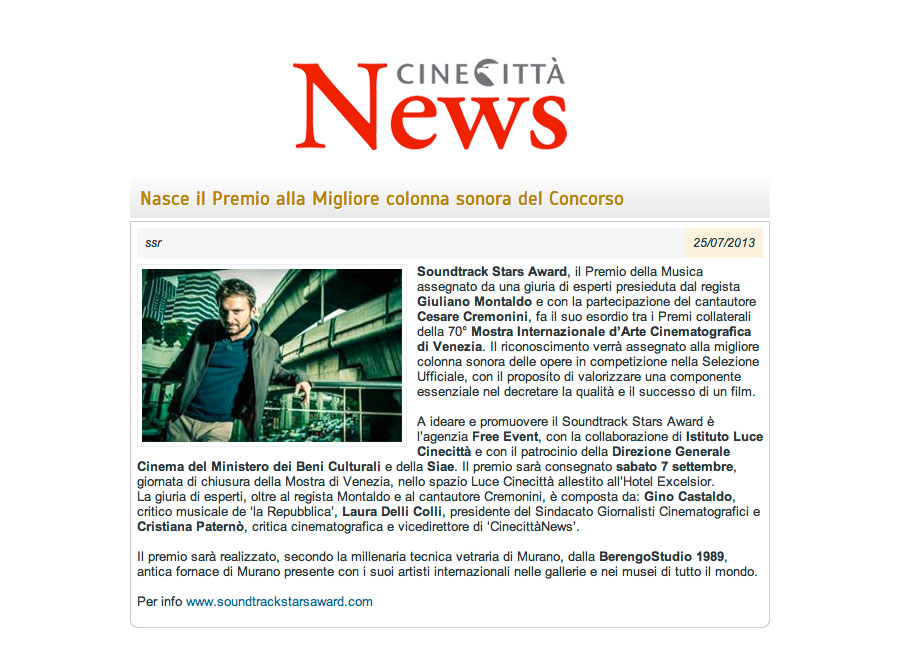 Soundtrack Stars Award, the Award of Music awarded by a jury of experts chaired by the director Giuliano Montaldo and with the participation of the singer Cesare Cremonini, makes its debut among the Awards side of the 70th Venice International Film Festival. The award will be awarded to the best soundtrack of the works in competition in the Official Selection, with the purpose of enhancing an essential component in decreeing the quality and success of a film.

To create and promote the Soundtrack Stars Award is the agency Free Event, in collaboration with Cinecittà Luce Institute and sponsored by the General Direction for Cinema of the Italian Ministry of Cultural Heritage and the SIAE. The award will be presented Saturday, September 7, closing day of the Venice Film Festival, in the space Cinecittà Luce served at the Hotel Excelsior.
The panel of experts, as well as director Montaldo and songwriter Cremonini, consists of: Gino Castaldo, music critic of ‘the Republic’, Laura Delli Colli, President of the Syndicate of Film Journalists and Christian Paterno, film critic and deputy editor of ‘CinecittàNews’ .

The award will be made, according to the age-old technique of Murano glassmaking, from BerengoStudio 1989 ancient furnace in Murano present with its international artists in galleries and museums around the world.